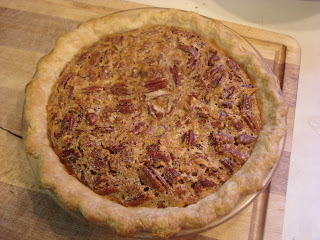 Yesterday I conducted a little pie baking experiment. But first let me briefly tell you why.
Thanksgiving, I made two pecan pies. One for my family and one for a friend. The one I made for us came out great. I used Pioneer Woman's recipe and ours came out fine. And since it was for us, I used a glass pie plate.
Then I made one for our friend using a disposable aluminum pie pan and his didn't set! This angered me greatly! I mean, hey, I bake for a living..I'm supposed to know better! And pecan pie is like the easiest pie to make!
So yesterday I decided to bake two more pies, one in the glass pie plate and one in the aluminum pie pan to see what happened...and why.
I also chose to try a different recipe so I chose this one.
This pecan pie recipe is quite a bit different from most. It uses way less sugar and a little molasses and flour! The result was a not at all sweet pecan pie which was a little strange ( with all due respect to this blogger) because part of what we've come to expect from pecan pie is the extreme sweetness and when it's not there it's..well..just strange! But wait! This pie was really delicious.
Ok, back to the experiment. The result was that the pie baked in the glass plate was finished much sooner than the other pie. I actually had to leave the one baked in the aluminum pan in the oven about 20 minutes longer because it was just still too jiggly.
So what have we learned from this? Ovenproof glass pans distribute heat better than aluminum disposable pans and result in a shorter baking time. And the crust came out better, too. But you all probably knew all this already! And, yes, this pie went to my friend today. ( Albiet, cut in half!)
Oh yea, one more thing. I figured out a much better way to cover the edge of the crust once it starts to brown too much. Just cut a square of foil and cut an X in the middle. Then cover the pie with the foil... 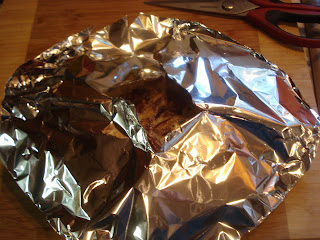 Then tear the foil open to expose the top of the pie while keeping the edge of the crust covered.
See? I don't know about you but I had a dickens of a time keeping that darned foil in place everytime I tried to wrap strips around the crust. It never stayed in place for me! 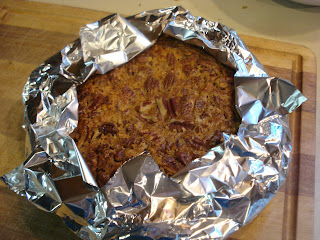 This is the pie baked in the glass pie plate. And here's the pie baked in the aluminum pie pan. 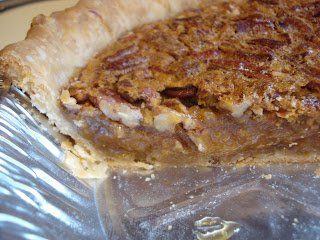