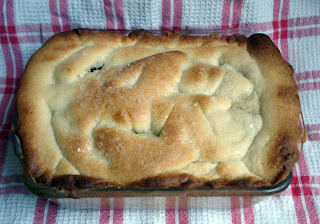 This very long weekend of cold rainy weather gave me some extra time to try a few more recipes from Dorie Greenspan's Cookbook, "Baking From My Home To Yours".
My one big objection to this book is the lack of photos. I get very frustrated with a cookbook that doesn't show photos of the recipe or dish to be made. I did check other bloggers who had made this Russian Grandmothers' Apple Pie Cake before so I had a slight idea of how it would look, once baked.
I decided to halve the recipe, since, like the previous apple pie bars recipe I made, it would have been too much for just the 2 of us.
I hope you will pardon my lousy photos. I didn't even get a good shot of the finished, cut piece on the plate so I'm showing you the finished pie cake in the pan with a piece cut out! At least this way you can see what the inside looks like!
A few notes on the baking.
I set the timer for an hour but the top started browning and then almost looking like it was going to burn so I covered the edges in foil and let it go a bit longer but with almost 15 minutes left on the clock I decided to take it out of the oven, making the total bake time only about 45 minutes.
In her book, Dorie says to bake it 65 to 80 minutes. Yikes... it would have been totally burnt by then!
Because I took it out ahead of time, the apples didn't get really nice and soft so that didn't make me happy!
Still, it tasted very good. The crust was the best part! It had a wonderful flavor, a bit like a sugar cookie taste.
Maybe I chose the wrong type dish? I had to find a dish that was half the size called for in the recipe so the only one I could find was a small deep dish pyrex. Perhaps it was too deep?
Would I make this recipe again. Probably not. I , personally, like more of an apple crumb pie, but then I like a bit of crunch to offset the soft apple and crust. 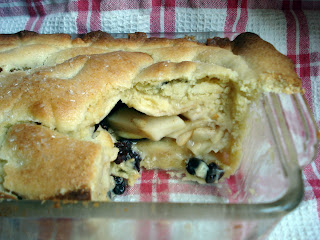 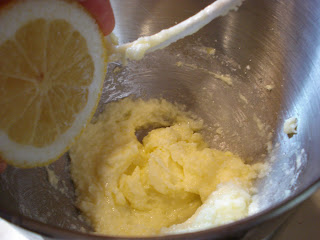 I did add a little bit more flour as Dorie says it might need. The dough came together very nicely. 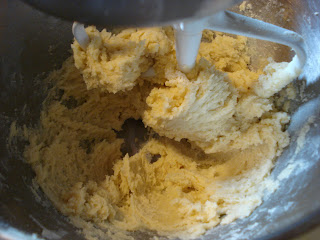 The dough was actually very easy to work with. I just sprinkled a tiny bit of flour and patted it into a rectangle and wrapped it in plastic wrap and chilled it. 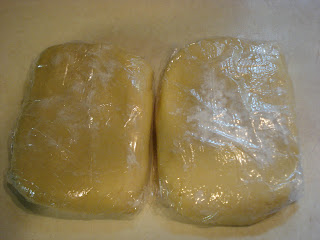 I cut up 5 apples but only used about 4. I used Golden Delicious and Gala. The recipe says to cut the apples 1/4 " thick, which I did but I think I could have sliced them a little bit thinner. 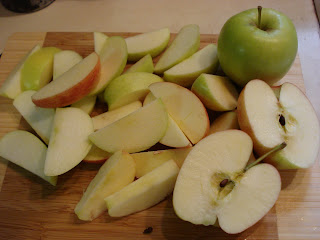 Place the dough into the pan and trim the excess along the edges to about 1/2". 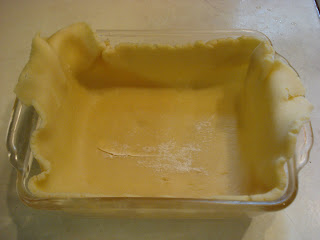 You can see how much extra I had left of apples and raisins. 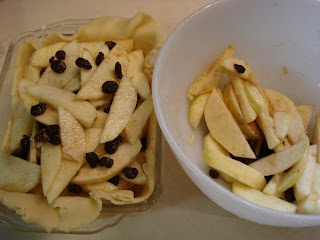 Ready for the oven. Sprinkled the top with sugar and cut slits into the top. Sure looks pretty!! 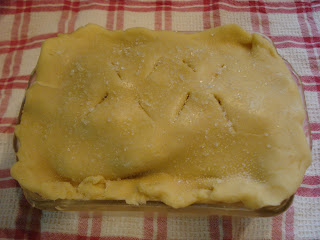 In the book Dorie says to cook til the top is a nice golden brown and the juices from the apples are bubbling up through the slits but this never happened.
I do think if I ever decide to make it again I will use a pie pan that isn't so deep.